The history of the Maison Sajou - Part 1

When I re-started Maison Sajou, I had little money, lots of ideas, a great collection of vintage haberdashery items and, most of all, lots of bounding enthusiasm. And now in May 2015 the Sajou website is celebrating its’ 10th year!
I can hardly believe it myself… For this anniversary, I wanted to evoke all the products I have created, but also the origins of Maison Sajou. In brief, all that you, my clients, and myself are passionate about. This embroidery project evoking the world of Sajou is the third opus in our Museums and Heritage collection through which I hope to transmit all the aspects of French textile heritage.

For the colour choice of embroidery linen, I didn’t have to look too far – our 12 count Sajou Blue embroidery linen was essential! The pattern chart measures 345 points wide and 342 points high. When embroidered over two strands of 12 count linen, the finished project measures 57.5 by 57cm. To leave sufficient margin for the finishing touches, I suggest you use a 70 x 70cm swatch. Concerning the composition, I chose elements which are particularly close to my heart and have helped create the history and success of Maison Sajou. All the articles I create are inspired by vintage models, but none is an exact reproduction. Not only because production techniques have evolved, but also because, apart from adding my own personal touch, I do not want the slightest ambiguity: Sajou products are “vintage-style”, but should not be mistaken for antique products.

THE ELEMENTS OF THE EMBROIDERY

During the history of Sajou and notably on the album, the name was designed in different manners. When I re-launched the brand, I chose this version which I find the prettiest and the most legible, as well as being incredibly modern for a logo created in the 19th century. Nevertheless I have used other versions of the logo for certain products. A little known fact: “sajou” or “sapajou” is also the name of a cheeky little capuchin monkey from South America. Given that a lot of family names were formed after a physical or moral particularity, should we deduct that Monsieur Sajou had ancestors that were either small or maybe a bit mischievous? Not a lot is known about this subject and the monkey here is just an allusion.

THE STEPS OF THE HISTORY OF MAISON SAJOU

Originating from Sens, Jacques-Simon Sajou started up a first small workshop situated in the Ile de la Cité (Paris). He moved around quite a bit before installing himself from 1842 to 1845
in rue Michel-le-Comte in the 3rd arrondissement.
This is an interpretation of the logo which can be found on the Sajou blue “miniature” albums.

After the Marais district, Jacques-Simon Sajou installed his activities in the Ile de la Cité
at 17 rue Barillerie where he stayed from 1845 to 1848, or maybe even only 1847.
The representation of the Sajou logo here can be found on the Sajou mauve albums.

After three years on the Île de la Cité, Jacques-Simon Sajou moved back to the 3rd arrondissement
in the rue Rambuteau, created a few years before by the Prefect of the same name
(the number 50 would later be changed to 52).
In 1848, Mr Sajou was 43 years old. He married Astasie Granger in 1840,
the niece of the painter Jean-Pierre Granger.
In 1864 Monsieur Sajou withdrew from his business which he left to his brother in law,
Claude Marie Cabin, husband to Astasie’s sister.
The Sajou represented here is the one that appears on the green Sajou albums.

After more than 30 years in the rue Rambuteau, Maison Sajou moved in 1882 to 74 boulevard Sébastopol.
The company is directed by Claude Cabin’s son and in 1885 he is joined by his son in law, Georges Lefèvre.
The district is lively with a large part of the businesses being in textile and haberdashery.
The writer, Léon-Paul Fargue (1876-1947) evoked his youth in Le Piéton de Paris:
“We browsed through the boulevard like an album. We knew all the all the shops, the underwear at Cour Batave,
the furniture of the Petits Agneaux, the Sajou embroiderers, the Suzor bobbins…”
Here we find a Sajou logo inspired by the one on the large albums of whitework and filet lace.

In 1897, Maison Sajou is directed by the son in law of Georges Lefèvre,
Emmanuel Anglard, who became the owner in 1902.
With a strong military background (many campaigns in Tonkin), this energetic man was heavily involved
in the great exhibitions of the time and obtained many prizes,
notably in Milan (1906), Brussels (1910), London (1912), Ghent (1913)…
In 1934 when Emmanuel Anglard is 61 years old, Sajou moved to 53 rue de la Boétie
in the 8th arrondissement. The company disappeared in 1954.
This is the interpretation of the Sajou logo on the beige tapestry albums.
It is the same that I used for the red Sajou album series,
a colour that never existed in the vintage Sajou albums.

The company having become obsolete, I decided to revive the Sajou brand
and registered the name in November 2004. The website opened in May 2005.
Author of numerous books, notably on embroidery and collectibles,
I had a small office in Versailles, just next to the Château, where the company is still based,
watched over by the equestrian statue of Louis XIV.
It was never my intention to claim succession of Maison Sajou which is why I invented the formula “NRP”,
in French “nom repris par” (name resumed by).
This has no legal value but is just a touch of humour.
Among all the different ways that Sajou has been written over the years,
I chose the one on the tapestry albums printed in colour.
As for the orange and blue emblematic colours of the brand,
this was really just a coincidence: these are the colours of an old stock of cardboard available
when I asked a box maker to make my first boxes at the lowest possible price. 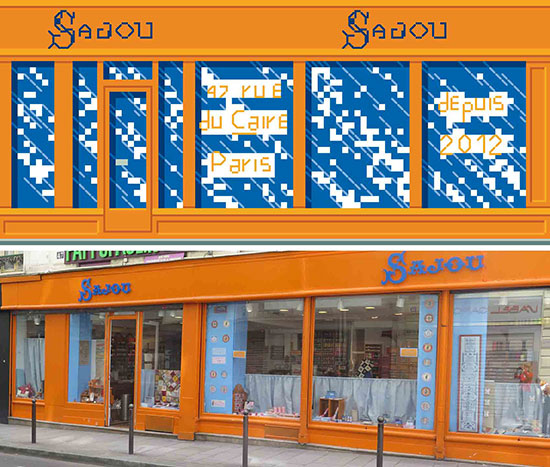 To be honest, opening a Sajou shop in the centre of Paris was not one of my priorities.
It was an opportunity that came up – one of the last remaining haberdashery wholesalers wanted to retire.

Besides the rue du Caire being situated in the historical textile centre of Paris,
this address is also a return to the roots of Sajou:
it is just a stone’s throw away from Boulevard Sébastopol and rue Réaumur, the origins of Sajou.