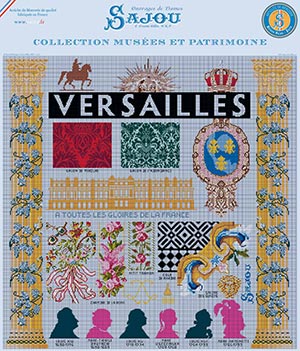 The Palace of Versailles… I have been living next to it for almost 30 years. The windows of our Maison Sajou offices overlook the Place d’Armes. Why did it take me so long to create a pattern chart dedicated to it? Maybe I was slightly intimidated by the vastness of the subject. It is true that the central theme of our Museums and Heritage Collection is the world of textiles and curiously enough, it was not an easy choice. I wanted this pattern chart to reflect an “ordinary” visit to the Palace, without taking into account the private visits to areas normally inaccessible to the general public. And then there is not only the Palace, but also the Trianons, and the considerable presence of Marie- Antoinette. The idea gradually formed to create two pattern charts: one dedicated purely to the Palace and the other concentrating on Marie-Antoinette.

Those who have already discovered the Museums and Heritage Collection know that I distinguish each collection with a specific colour of linen fabric. Here, the pearl grey was the obvious choice as it enhances the rich and colourful elements of the composition, starting with the pillars reproducing part of the sumptuous fabric in the King’s Bedchamber. As with each project, my choices are totally subjective. Why this wall covering or element rather than another? A question of balance of the whole project, the colours, the layout of the different elements, the ability to find relevant documents, maybe even a bit of fate…

After a few unsuccessful tries, I eventually opted for an interpretation of the visual identity of the Palace of Versailles logo, a black banner topped with a sun. The typography,called “Apollon”, can appear a bit simple, but in the end it is extremely chic. There was not enough space to put “Château de Versailles” entirely, which would have made the banner too imposing.

I would have loved to design the silhouette as seen from the front on arriving at Place d’Armes, but what with the pavilions on the sides, the recess of the Marble Courtyard and the chapel on the right, it was difficult to obtain a recognisable result. So you will have to make do with this view of the facade from the gardens.

After the 1830 Revolution which drove out Charles X (the last brother of Louis XIV), his cousin Louis Philippe d’Orléans was proclaimed King of France. The new sovereign decided to turn the Palace of Versailles into a large museum dedicated to the history of France. In losing its status as the royal residence, the Palace became a museum for the people, grouping together some of the most spectacular of French arts. The architect Frédéric Nepveu was in charge of the transformation of the old appartments and grand halls dedicated “to all the glories of France”.

THE FABRIC PILLARS IN THE KING'S BEDCHAMBER

When I was thinking about the border of this embroidery, my first thought was to interpret the railings of the Palace. But there we were moving away from the textile theme and it wasn’t much fun. The idea to use fabric pillars in the King’s Bedchamber came to me a Sunday morning. I rushed off to get to the Palace before the visitor rush and ended up in the Royal Apartments almost by myself. I was the only person in the King’s Bedchamber and there I had my revelation! Originally, this room in the centre of the Palace was a lounge, separating the King’s apartment from the Queen’s. It became Louis XIV’s official Bedchamber in 1701. It was used often during the day, including for the king’s “getting up” and “going to bed” ceremonies. Later, seeking a bit of privacy, the kings downsized to smaller, more comfortable Bedchambers. The silk, gold and silver thread brocade is not the original fabric, which was incinerated in 1785 to salvage the precious metals. It is a reconstruction which was woven in the 1950’s by the two largest mills in Lyon – Prelle and Tassinari & Chatel. After the Second World War, the French government launched a huge restoration project, largely financed by American sponsors. The restoration of the King’s Bedchamber was overseen by the custodian of the time, Charles Mauricheau-Beaupré, and continued by his successor, Gérald Van der Kemp. The King’s Bedchamber was finally inaugurated on the 9th June 1980, after many decades of work. Consider this: it took over a year just for the draft of the restoration project. A loom was specially constructed and the weaving, at 2.7cm per day took 23 years to ­complete the 80 metres required! An excessiveness totally in keeping with Versailles. It is true that this interpretation in cross-stitch seems very modest in comparison to such a marvel.

THE MERCURY ROOM AND THE HALL OF PLENTY

Many of the rooms in the King’s state apartments are decorated with magnificent wall coverings which were made in Lyon. In their early stages, the silk manufactories in this region found their inspiration from their Italian counterparts, themselves inspired by oriental productions. Thus these fabrics were decorated with stylised botanical motifs evoking Acanthus leaves, large flowers, pomegranates… Most often they are brocatelle, a fabric with a raised effect created with a silk and linen warp decorated ­with silk. The repeat motifs were sometimes over one metre, adding to the grandeur of the cloth. To accentuate the fabric swatch effect, these fabric samples should be embroidered on different coloured linen squares: scarlet for the Mercury and lime tree for the Hall of Plenty.

THE EQUESTRIAN STATUE OF LOUIS XIV

An equestrian statue of Louis XIV welcomes visitors to the Palace at the entrance of the Place d’Armes where it was installed in 2009. Before then, it was situated inside the Palace gates. Although it seems to have always been there, this statue has had a turbulent history. The horse, sculpted by Pierre Cartellier, was recuperated from an older, abandoned project. The cavalier was made in 1836 by Louis-Messidor Petitot. The whole sculpture is 5.5 metres high. Obviously certain concessions had to be made on the details when ­transforming into a cross-stitch pattern, notably on the magnificent plume on his headwear.