Second part of the explanations for the Chambord plaid. To read the first part this is here.

The numbers indicated next to each of the motifs are corresponding to the numbers in the mounting plan which is reproduced in the first part of the explanations. 1 - When you have embroidered all the squares, iron them all and cut them down to a 13cm square. Make sure the motif is in the centre. Attention: the precision at this point will have an effect on the final result. Once done, arrange the squares on a large table or on the floor face down, following the mounting plan. 2 - Carefully pin the squares forming the first vertical band and sew at 1cm from the edge. Press open the seams with an iron. Do the same for the following bands.

3 - Once you have sewn together all the vertical bands (and pressed the seams open with an iron) you are going to assemble them together. Carefully pin the first 2 bands together: the stitch lines of each of the angles must match up perfectly. If you feel hesitant, feel free to tack the bands together before stitching. Take the time to iron the seams open
each time you sew a band. 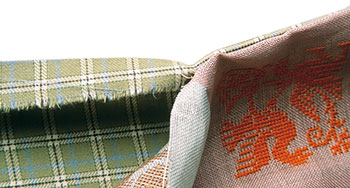 4 - Once the bands are all assembled, cut the backing fabric to the same size as the plaid. Place right sides together and sew around all edges leaving a 20cm opening. Pink the corners and turn outside in. Close the opening with a few invisible stitches.

5 - Cut and sew the ribbons in place starting with the horizontal bands.
The mounting plan indicates where to place them. Sew the vertical ribbons in the same way.

6 - Finish with the outer edge which is sewn using one piece of ribbon.
Make sure the ribbon is neatly tucked on the angles.
Finish off by overlapping the two ribbon ends.

This project has almost become a myth! I got the idea in 2007 when I was working on a book for Flammarion.
As I explain in Maison Sajou Point de Croix (published in 2007), “like all seasoned embroiderers, I have drawers full of linen scraps and embroidery floss. This project was born from the wish to use up all these scraps and assemble them in a sort of masterpiece...” When the book was published it was a huge success, then, on the Sajou site, more and more demands arrived from clients who didn’t have enough linen scraps or embroidery floss but who desperately wanted to embark on this project. So I developed the explanations, first with DMC floss because, at the time we had neither Laine Saint-Pierre nor Retors du Nord threads. And that is how we put together the complete kit for this Chambord plaid.We have sold hundreds all over the world. This project created a stream of amusing exchanges with photos and messages giving us news on the progress of the plaids, comments and messages of encouragement… After a while we took this project off our catalogue, thinking it had done its time. However, when we opened our store in Paris, we put two Chambord plaids in the shop front and again were inundated with requests. So here it is again the complete kit which is on the point of becoming a great embroidery classic.Most of the motifs come from my vintage archives, sometimes simplified, sometimes enlargened. The large majority come from designs intended for crochet.