At the beginning of the 18th century, shoes, most often made from fabric and decorated with ribbons, had relatively high curved heels, for both men and women. The fashion merchant, Rose Bertin is credited with launching the trend for lower and straighter heels. The finishing touch on a pair of shoes was the buckles, often containing gemstones.

BUTTON'S WITH THE QUEEN'S INITIALS

These two buttons are embroidered with the Queen’s initials. They are an essential addition to her garments. You can find a detailed explanation for mounting these buttons: How to mount our buttons. Albeit modest compared to reality, this profile of the Queen evokes the extravagant hairstyles created by Rose Bertin and Jean-François Autier, known as “Léonard”, wigmaker to the Queen. This was the period of the pouf hairstyle, a complicated contraption made of a thin metal frame stuffed with horses hair, on which were poised extraordinary objects, all largely beribboned and crowned with feathers.

In days gone by there were two types of borders for upholstery: large motifs for wall hangings and the same motif in reduced size for chairs and curtains. The border surrounding this project is an interpretation of one of these motifs in the Queen’s bedchamber at the Petit Trianon. In the centre is one version of the monogram of Marie-Antoinette, as it appears in the panelling of her small estate. “Madame, you like flowers, I give you this bouquet. It is the Petit Trianon”, so said Louis XVI to his wife the 24th May 1774. We know that the Petit Trianon was the designated estate of Marie-Antoinette. She created a bucolic setting, full of charm and simplicity. This is an evocation of the fabric in the Queen’s bedchamber: rose bouquets and cornflowers on a white fabric. The original fabric was embroidered by Marie-Olivier Defarges, from Lyon. This marvellous cloth covers the famous “wheat-ear furniture”, created by Georges Jacob: the wood is sculpted and painted with wheat ears braided with honeysuckle and sprigs of jasmin, embellished with lily-of-the-valley and pine cones. After being dispersed during the Revolution, part of this unique furniture has since been acquired by the Palace of Versailles. 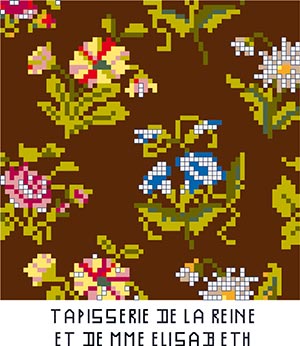 This is not a fabric, but a detail from a tapestry sewn in petit point by Marie-Antoinette and Madame Élisabeth (the youngest sister of Louis XVI). Sewn in fragments, first in the Tuileries prison and later at the Temple prison (from June 1791 to August 1792), the Duchess of Angoulême, during the reign of Louis XVIII, assembled all the pieces and added a border. As far as I know, this tapestry is not visible in the Palace of Versailles, but it was part of an exhibition at the nearby Domaine of Madame Élisabeth in 2013. I was so moved by this work of art and the circumstances surrounding it, I could not resist putting it in this project.. The sumptuous silk wall hangings in the Grand Apartments bedchamber are called “summer furnishings” because they were installed from spring to autumn. This is known as a “gros de tours”, a heavy taffeta decorated with intertwined flowers, ribbons and peacock feathers. It is also called “the Queen’s Brocade”. The original cloth was woven in Lyon by Desfarges Brothers. After having been dispersed during the Revolution, Maison Lamy & Gautier wove a new version at the beginning of the 20th century. A swatch of this fabric can be seen at the Fabrics Museum in Lyon. Here on the right, an extract from the border of this summer furnishing, comprised of roses and lilac woven on an “apple green” base. If you have the opportunity to visit the Palace, take the time to admire the alcove, the couch, the cushions, the chairs, the fireguard and the stools, all inspired by the same motif.